What are bleeding disorders?

Coagulopathies or bleeding disorders are a group of blood coagulation disorders. They can be inherited (such as haemophilia, von Willebrand disease or hereditary platelets conditions) or acquired (caused by a defect in the synthesising process of the plasma constituents of the blood, or by an assimilation of antibodies attacking haemocoagulating factors). Acquired coagulopathies are primarily caused by an unhealthy diet, malabsorption or medications inhibiting the absorption of vitamin K (which helps with blood coagulation). 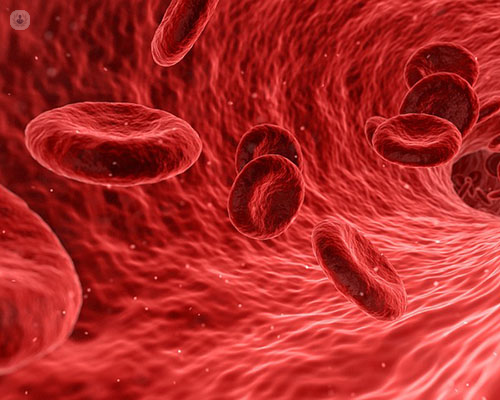 Some bleeding disorders can cause the blood coagulation process to fail (haemorrhage or haemophilia). On the contrary, others can lead to hypercoagulation (originating thrombosis and embolisms). In both cases these disorders could become potentially life-threatening if not adequately treated.

What are the symptoms of bleeding disorders?

The most common symptoms of a bleeding disorder are:

How are they diagnosed?

You will have to go through your medical history with your doctor, including your habits (which medications you’re on, if you’re allergic to anything, if you have had blood transfusions before, if you smoke and/or drink). You will also have to do a blood test (with specific testing regarding coagulation factors).

How can they bleeding disorders be prevented?

People with a high risk of developing coagulopathies should take some preventive measures, especially in case of excessively rapid clotting (which can lead to thrombosis). Exercising regularly, losing weight and avoiding sitting for too long can help you fight bleeding disorders.

How are bleeding disorders treated?

In the most severe cases, coagulopathies can be treated with blood transfusions. However, the most common treatment is medication.

Which medications can I take?

A haematology specialist may prescribe one or more of the following medications:

Which doctor should I talk to?

You should see a haematology specialist, who will prescribe all the necessary tests and treatments.

Any cookies that may not be particularly necessary for the website to function and is used specifically to collect user personal data via analytics, ads, other embedded contents are termed as non-necessary cookies. It is mandatory to procure user consent prior to running these cookies on your website.